Out of hours email and phone messages are checked 24 / 7. Emergency appointments are available from £95 and radiographs £17

Noël Cottle
09:04 16 Dec 22
I can't recommend the 53 team enough. I used to be so scared of visiting the dentist but I've been with them for at least 10 years and I now look forward to the visits.Bhavin is fantastic and is not wrong when he jokingly describes his fillings as 'works of art'; Marcia is so welcoming and always makes laugh in the Hygienist's chair; and I've just spent a 18 months under the care of the brilliant Arti for orthodontic work. They are all genuine, lovely people, who really care about the health of my gums and teeth. I don't think you'll find a better team.5x huge gold stars, 100% recommended.

Thomas Stofer
17:41 18 Oct 22
Arti has been great through my Invisalign process - answering my (lengthy and frequent) questions and providing a lot of encouragement. You can really tell that she genuinely wants you to achieve the best results possible and takes the time to explain the process in a manner that is reassuring and confirms that you are in capable hands. Now that the process is completed I will miss her warmth and humour at our regular check-ups.

Jacob De Haan
16:24 12 Feb 22
10/10 service. Arti has been extremely helpful throughout the Invisalign process. I believe she genuinely cares for the outcome of her patients, made apparent by her work.

Ben Lethbridge
19:35 07 Dec 21
I loved working with Arti. She was utterly thorough and pushed me to take the treatment seriously and was clear about the implications.She motivated me to commit - I’m thrilled that I chose to go down this route rather than another dentist I spoke to. It’s likely that I would not have got into the process so deeply with another dentist. She also cares about a successful outcome passionately and that helps you get on board with it - she is driven and lives her work. Her bedside manner is warm and engaging and I enjoy her company very much.

Angelina Engeris
13:00 04 May 21
Best dentist I’ve used! Highly recommended Bhavin, he made my experience visiting the dentist so much better. I am incredibly impressed with the level and quality of service.

Michelle Williams
14:45 11 Feb 21
I recently moved and was looking for a dentist closer to home. I came across 53 Wimpole Street and decided to give them a try. I can confidently say that Dr Patel and his team provided the best service and care I have ever experienced at a dental practice. He was extremely patient with answering all of my questions and made me feel at ease. I would highly recommended booking your next appointment with him!

Alpesh Tosar
20:39 06 Feb 21
We recently relocated from New York, and Bhavin and the team have been fantastic. Great service and great people, they made us feel totally at ease and we actually look forward to seeing them.

Kieran Todd
16:02 04 Feb 19
Lovely clinic and backed by a lovely team. I have always felt very welcome at every visit by Janet. Lida, my orthodontist is brilliant. She really knows what she is talking about and she is very compassionate, friendly and professional. I would happily recommend this clinic. In fact i have done so, my sister gets her braces next week!

Andrew Sedgwick
05:12 08 Aug 17
I was dreading my first visit to the Wimpole Street having had so many bad experiences in the past but I was blown away by the combination of kindness, explanation and professionalism. I was placed completely at ease (which is unusual for me).Delighted with the results (and the fact that the treatment was far more reasonable than I had expected), I can highly recommend that you give these guys a call.I can now smile with confidence!

Bav Patel
13:14 07 Aug 17
I am not usually one to write a review regarding my dentist experience (usually I reserve this kind of feedback for hotels/holidays etc), but I am a very nervous patient, like many I suspect and after 25 years of being worried, concerned even embarrassed about showing a person my teeth, I finally decided to visit this practice (from a recommendation) and was very surprised. The dentists are great and very in tune with a patients concerns and quick to work out and put you at ease on any hang ups you have. I felt very relaxed and was given lots of options around what treatments I should think about and how these should be scheduled.Come to think about it the staff are all very professional but to me the most important thing is they are approachable/likeable. They treat you like you have been going there for years which is a great attribute.If your looking for a new dentist or looking to visit a dentist after a very long time I can thoroughly recommend this professional, friendly practice!
See All Reviews Write a review 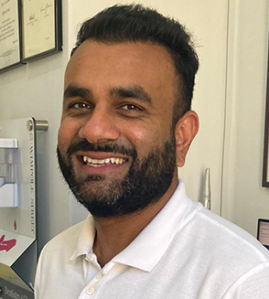 Bhavin qualified from St Bartholomews and The Royal London School of Medicine and Dentistry, University of London in 2006. He graduated with Distinctions in every part of the BDS undergraduate course attaining Honours and being the Proxime accessit to the University of London Gold Medal.

After completing Vocational Training he obtained a Senior House Officer post in Oral and Maxillo-Facial Surgery at Bart’s Health Trust Hospitals. During these rotations, he performed complex surgical dentistry under local and general anaesthesia in elective and accident and emergency situations. Bhavin also gained a Speciality Doctor position in Oral & Maxillo-Facial Surgery which he did part-time when going back into general practice where he operated and supervised junior members of the team at Whipps Cross Hospital.

Bhavin furthered his training as a Senior House Officer in Restorative Dentistry at The Royal London Dental Hospital. This post furthered his experience and skill in Endodontics (Root Canal Therapy), Prosthodontics (crown, bridges and dentures), Periodontology (gum treatment ), Oral Medicine and Emergency dental care including trauma. During this rotation, he also provided treatment under inhalation and IV sedation for special needs and dental phobic patients.

During his hospital-based positions, Bhavin achieved the prestigious Diploma for Membership of the Joint Dental Faculties of The Royal College of Surgeons of England and went on to be a lecturer for the examination. Since then he has continued his professional development providing general dental care at practices across Essex and also became an honorary clinical lecturer at the Royal London Dental Hospital. He joined our team 7 years ago and became a partner in 2017. Bhavin’s interest is in Cosmetic and General Dentistry as well as surgical and Implant therapy. He has now also been awarded the prestigous Diplomate in Implant Dentistry from the Royal College of Surgeons Edinburgh.